Despite falling commodity prices, and a number of key challenges hitting the industry in 2016, mining still has some interesting trends emerging in 2016. Deloitte has identified several issues that mining companies will have to deal with over the next 12 months – not least adapting to exponential change while preparing for the future. The trends we have identified as this year’s hot topics could play an essential role in meeting these challenges. 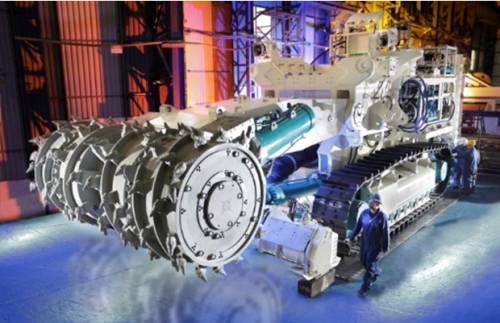 Here are five trends we believe will play a big role carving out a new future for mining in 2016 and beyond.

Renewables rise in relevance
At the time of writing, oil prices are continuing to plummet – falling below $28.50 per barrel and diesel prices are following suit. However, miners are aware that this won’t last forever. Operators know they will have to prepare for rises in commodity prices.

Renewable energy can be used to provide cost-reducing energy solutions for the mining industry. As diesel prices won’t stay low forever, many companies have increased their implementation of renewable projects at mine sites.
Rio Tinto, alongside the Australian Renewable Energy Agency (ARENA), have commenced the start of a two-phase solar project to generate electricity for its remote Weipa bauxite mine in Australia. Up to 2,800 MW of power will be generated for the mine as well as processing facilities and the associated township.

ARENA is funding the project, providing $3.5 million for the first phase. An additional $7.8 million will fund stage two. This is the first time a commercial diesel displacement system has supplied power to a remote Australian mining operation on such a large scale.

Deep-sea mining gains greater viability
Robotics have played an essential role in the automation and streamlining of mining processes in recent years. Deep-sea mining could become a booming industry thanks to robots. Nautilus Minerals will begin commercially exploring the seafloor for deposits of high grade copper, gold, zinc and silver using robots developed by Soil Machine Dynamics.
Soil Machine Dynamics is a specialist remote intervention equipment manufacturer. The firm has designed a number of machines to effectively mine minerals at a depth of 1,600 metres below sea level. Specialised Seafloor Production Tools created for this project include the Auxiliary Cutter, Bulk cutter and Collecting Machine. Each robot plays an important role in the acquisition and delivery of crushed ore, which is then processed by a unique production support vessel.

Nautilus plans to mine below the surface of the Bismarck Sea, roughly 30km offshore from Papua New Guinea. Some 2.5 million metric tons of ore, yielding $1.5 billion in precious metals, are expected to be collected.
Deep-sea deposits offer potentially huge amounts of untapped resources. Improvements in robotics will ensure these can be accessed, as the environment is unsuitable for human-led exploration.

The final mining frontier draws closer
Space mining took one step closer to becoming a reality as US lawmakers approve a law allowing private companies to claim ownership of any non-living resource they obtain in space. The Spurring Private Aerospace Competitiveness and Entrepreneurship was approved (SPACE) Act was approved by the US Congress in late 2015.
With a law now in place, in the US at least, space mining is becoming a more legitimate future for the industry. Technology, of course, is still in its infancy but there has still been some impressive steps taken towards extra-terrestrial mining becoming a reality.

Planetary Resources, the front-runners of corporate space mining, continues to make advances in asteroid scoping technology. This mimics systems used in conventional mining, namely relying on infra-red sensor technology, but will be connected to a bank of Arkyd 100 satellites to scan nearby asteroids for resources. Scientists have also developed a gamma-ray spectroscope that is capable of detecting metals in passing space rocks.
The dream of launching the inaugural mining operation is still a few decades away – but Planetary Resources is confident that the time frames exist well within conventional industry standards. Astrologist Dr Martin Towner of Curtin University, Australia, commented: “The sort of technologies of autonomous and remote robotics used in space are very similar to the systems that are now arriving in the resource industry so technology could flow both ways.”

Automation continues to grow
Technology continues to increase the levels of automation present in the mining industry into the future. However, some areas of mining processes, such as leaching, still rely on manual identification and troubleshooting methods.
Netafim, an Israel-based dripline solutions company, has created a new monitoring and control solution to boost operational productivity, as well as optimising leaching methods. Consisting of a package of software, hardware and support equipment, the new system utilises radio and cell-based technology to monitor the leaching process. Real time control is also provided.
The automated system incorporates movable skids that contain radio or cellular controls. Also included are controls for valves, metres, gauges and other key components. “Mines are able to benefit from increased efficiency and reallocate manpower needs to other areas of the mining operation,” Karen McHale, Netafim USA’s mining division North American sales and engineering manager, commented on the benefits of this technology.

With the data collected and provided from the Netafim leach pad system, operators are expected to improve operations and maintenance. The idea is to offer real time problem solving and monitoring while saving on manpower.

The Internet of Things influences mine craft
Smarter systems, collating more and more data for analysis, is set to expand in 2016.The Internet of Things, the drive to enable more devices than ever before to include network connectivity, will have a profound effect on mining.
The Australian Information Industry Association (AIIA) is spearheading these advances alongside the South Australian government. Clusters of collaborators, operating with common goals in mind, already exist in other industries, but the operation forming in Australia is believed to be the only one currently in the mining sector.
As sensor technology is already prevalent in mining, this project seeks to collect and utilise more of the available data for greater operational efficiency and business insight. AIIA’s CEO said that sensors with internet connectivity, for example, would offer “wisdom, truth and insights” to share across the cluster. This in turn would improve business relations as well as identifying areas of development or improvement.
The South Australian government is contributing $750,000 over three years towards this project. Manufacturing and Innovation Minister Kyam Maher commented: “The Internet of Things will open new opportunities in the mining and energy resources sector, with the power to make our local industry more productive and better able to maintain competitiveness in highly volatile global market.”

An exciting but challenging future ahead
In closing, 2016 promises to offer advances into great unknowns, both below the sea and in outer space, plus improved connectivity for the world of mining. Automation will continue to make some great leaps, with cost-saving and improved efficiency in mind, alongside a wider berth of renewable energy projects powering remote mines.