Kazakhstan is now the US top uranium supplier

According to the EIA, 23% of the uranium acquired by the U.S. — 12 million pounds— was of Kazakh origin, while 20% came from Australia and 18% from Canada.

The country, which was the site of 456 devastating nuclear tests when part of the former Soviet Union, gave up its own nuclear arsenal in 2001.
Yet Kazakhstan remains the world’s largest producer of the raw material, used for nuclear energy and nuclear weapons production.

“Average Kazakh uranium prices have been lower than other major supplying countries’ prices for the past two years,” the EIA noted. “Uranium from Kazakhstan was $44.47 per pound in 2014, compared with the overall weighted-average price of $46.65 per pound for the 41.3 million pounds of uranium purchased from producers outside Kazakhstan in 2014.” 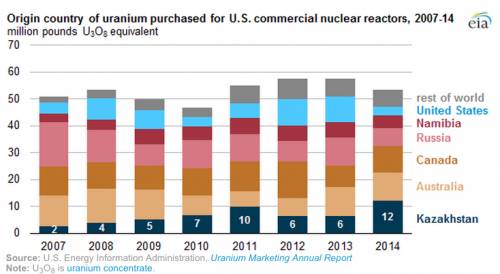 The Central Asian country has more than tripled uranium output since 2007. In 2009, it overtook Canada as the world’s leading uranium producer, while Canadian output has remained constant and Australian totals dropped 42%. 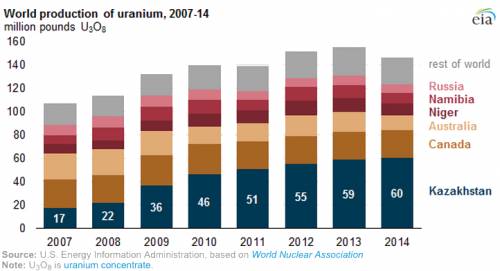 The U.S. holds top place for global nuclear energy, producing about 30% of the world's total, according to the World Nuclear Association. Last year, 100 reactors generated over 19% of the country’s electricity. The U.S. now has 99 reactors in operation and another five under construction.